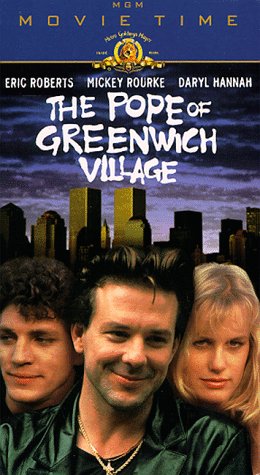 If you knew me in my late teens / early 20s, you would have known about my obsession with the movie “The Pope of Greenwich Village.” At the time I couldn’t put my finger on why, but I simply loved the movie, watching it over and over, marveling over Mickey Rourke’s naturalistic acting technique that echoed Brando at his best. I viewed it so many times I could recite nearly every line of dialogue (still can).

In hindsight, what appealed to me about Pope was less an individual performance than the vividness of the characters. There are no good guys, no bad guys. All the major characters–even the minor ones–are richly complex and morally ambiguous. None of them are particularly likable, but their situations are utterly engaging.

I recently re-watched this movie for the first time in ages, and I thought about how this “my moral compass doesn’t always work” kind of character has always fascinated me, both in the books and movies that I love, as well as in the stories I create myself. In “The Pope of Greenwich Village,” one of the greatest moments happens when a character–who’s spent most of the movie making self-righteous speeches about right and wrong–steals a shoe box full of money (originally stolen from a mafioso’s safe by the main character) and disappears, leaving her ex broke and vulnerable to the killers who are hunting him down. And insult to injury, she leaves her ex a recorded voice message justifying her actions. It’s a wonderful “holy shit!” moment, and I just love it when the sanctimonious go bad. And I love it just as much when the baddies have an unexpected display of magnanimity. In my books I try to do this, making my characters complex, contradictory, oftentimes difficult to sympathize with, but hopefully, in the end, engrossing. You’ll never find a BAMF Katniss Everdeen in my work, walking the moral straight and narrow and kicking butt after butt (I can already hear the haters cracking their knuckles, readying themselves to write their long rebuffs…that I’ll ignore). You’ll also never find a square-jawed Mark Watney, smirking and making jokes about disco music while he does life-saving math problems (so cool under pressure…what a hero!!!). If you like that sort of character, good on you, but you might want to skip my stuff. 🙂